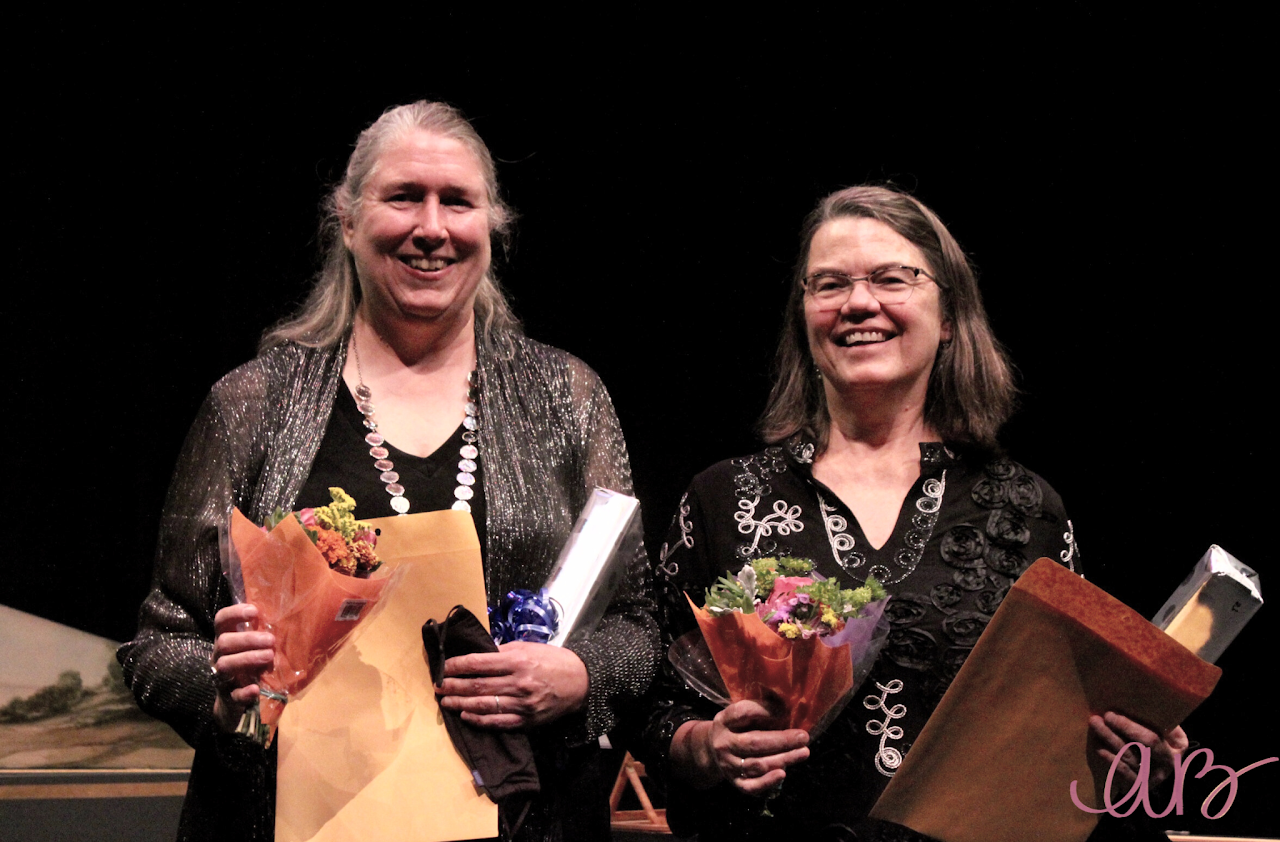 On stage were Mary Maarbjerg, Sue Roessel, and Marilyn Boenau, former ARS board members. Wendy Powers gave a short speech, then gave Tish and Frances their certificates, their beautiful engraved recorder stands, and some flowers. Frances made a short very gracious thank you speech. 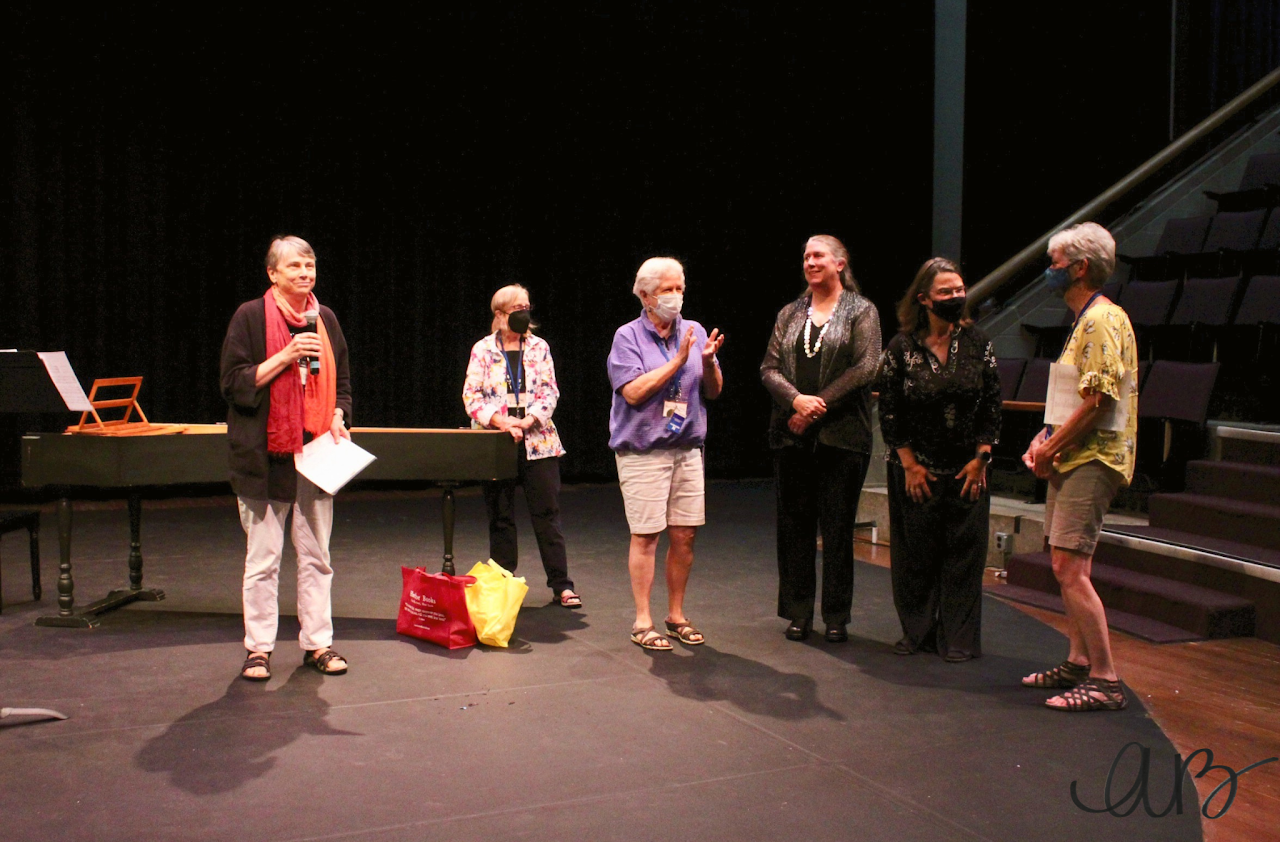 Everyone stayed after the concert to see the ceremony, and it was a wonderful occasion.

The ARS Distinguished Achievement Award was set up by the Board of Directors in October 1986 to recognize and honor individuals who have made extraordinary contributions to development of the recorder movement in North America.

The award is intended to honor a person or a performing group with the following record: Letitia Berlin (Tish) received a Bachelor of Music in piano performance from UNC Greensboro in 1982 where she studied piano with Inga Morgan and played in the Early Music Collegium with Carol Marsh, and a Master of Arts in early music performance practice from Case Western Reserve University in 1992. She plays with the Bertamo Trio, the Farallon Recorder Quartet, Calextone, and Tibia Recorder Duo. She served as ARS Board President from 2006-2008.

Frances Blaker received her Music Pedagogical and Performance degrees from the Royal Conservatory of Music in Copenhagen where she studied with Eva Legêne. She also studied with Marion Verbruggen in the Netherlands. She plays with Ensemble Vermillian, the Farallon Recorder Quartet, Calextone, and Tibia Recorder Duo. She has served on the ARS Board of Directors.

We met at a workshop in 1991 and, not long after, decided to make a life together. We recognized that together we would be able to make more impact than working alone. It was natural to help others enjoy the instrument that we loved. We have had great fun and satisfaction in starting and nurturing projects that could help recorder players in their own development.

Early on in Atlanta, GA, we were instrumental, with Martha Bishop and Pat Nordstrom, in starting the Atlanta Early Music Alliance, which still thrives today. Our goal then was to bring together local professional and amateur early musicians for the good of all. Later, living in California, we decided that amateur recorder players would make more progress if there were a multi-day workshop focusing on technique. This technique infusion could bring their playing to a new level, and so we started a five-day workshop called the Next Level Recorder Retreat. Next Level has evolved to include two workshops each year - one in California and one in the Southeast, currently in Virginia.

For several years we ran a small workshop out in the country near Florence, Alabama. During a happy hour chat (a crucial part of workshop schedules) someone asked “If we can do this in Florence, Alabama, why not in Florence, Italy?” And why not? Out of that came our workshops in Europe. We have run workshops in Italy several times, as well as twice in Brittany, twice in Wales, once in Cornwall, twice in Scotland, and soon we hope (pandemic fingers crossed) to do one in Spain.

We both feel immensely honored by the bestowal of the Distinguished Achievement Award. So many of our colleagues have worked hard to contribute to the recorder community in North America, and the ARS itself has heroically stepped up to the plate during the pandemic, helping all of us - professionals and amateurs - make it through this extraordinary time. We have both served on the ARS Board so we know not only how much fun it is, but how much hard work goes into being a board member or staff member.

We accept this honor humbly, with gratitude for the ARS, our colleagues, and all the students who have brought joy to our lives.

I first met both Tish and Frances one year after I began recorder at the 2011 Fall Texas Toot and was in awe of their recorder teaching ability, musicality and mastery. I’ve attended ten of their workshops including seven of their outstanding Next Level workshops on recorder technique, ensemble playing and repertoire (with a legendary happy hour). I’ve also attended three of their destination workshops in Europe. In the 11 years I’ve been playing, Tish and Frances have been an integral part of my recorder journey.

Tish and Frances are also an integral part of the recorder and its music  -- they both served on the ARS Board, Tish as President. They are involved in workshops and festivals on both coasts as instructors and performers, from Amherst to Berkeley and the Texas Toot in the middle. Frances wrote her Opening Measures series of 42 technique articles for the AR Magazine, which lives on as a book available from ARS. She is also an accomplished composer for recorder – see her 2019 Play-the-Recorder month piece, “Ice and Rain and Snow.”

As a response to the pandemic, Tish and Frances quickly moved to an online platform -- for individual lessons, group playing sessions, instructional sessions, recorded tracks for play along or even entire workshops online, including their now world-famous daily practice challenges. They have helped us stay connected and play on, and they’ve done it with verve.

So, at the ARS Board of Directors meeting last fall when the Distinguished Achievement Award came up, I had to ponder for about 5 seconds before nominating Tish and Frances.

It is with such pleasure that I announce the winners of the American Recorder Society Distinguished Achievement Award for 2022. Please join me in congratulating Letitia Berlin and Frances Blaker!
Photo credits: Amy Bearden