Behind every recorder player is a unique story of how that person became a recorder player. Incredibly rich and varied, the stories reveal the diverse circumstances that can bring the recorder into people’s lives.

Help ARS build our collection of recorder stories. Click HERE to send us your story. In 4-6 sentences or so, how did you come to take up the recorder? Feel free to attach a picture.  Here are some examples:  ARS NOVA Recorder Stories - How People Took Up Recorder.

The fine print: With your submission, you are giving the American Recorder Society permission to publish your Recorder Story and your photo (if submitted) on our website. We will review your submission and may contact you with editorial questions. We might not publish all submitted stories. Submitting this form only gives us permission to use your story and photo on our website, but we may contact you directly to ask separate permission to use your story in other contexts (including fundraising emails, print materials, etc.). 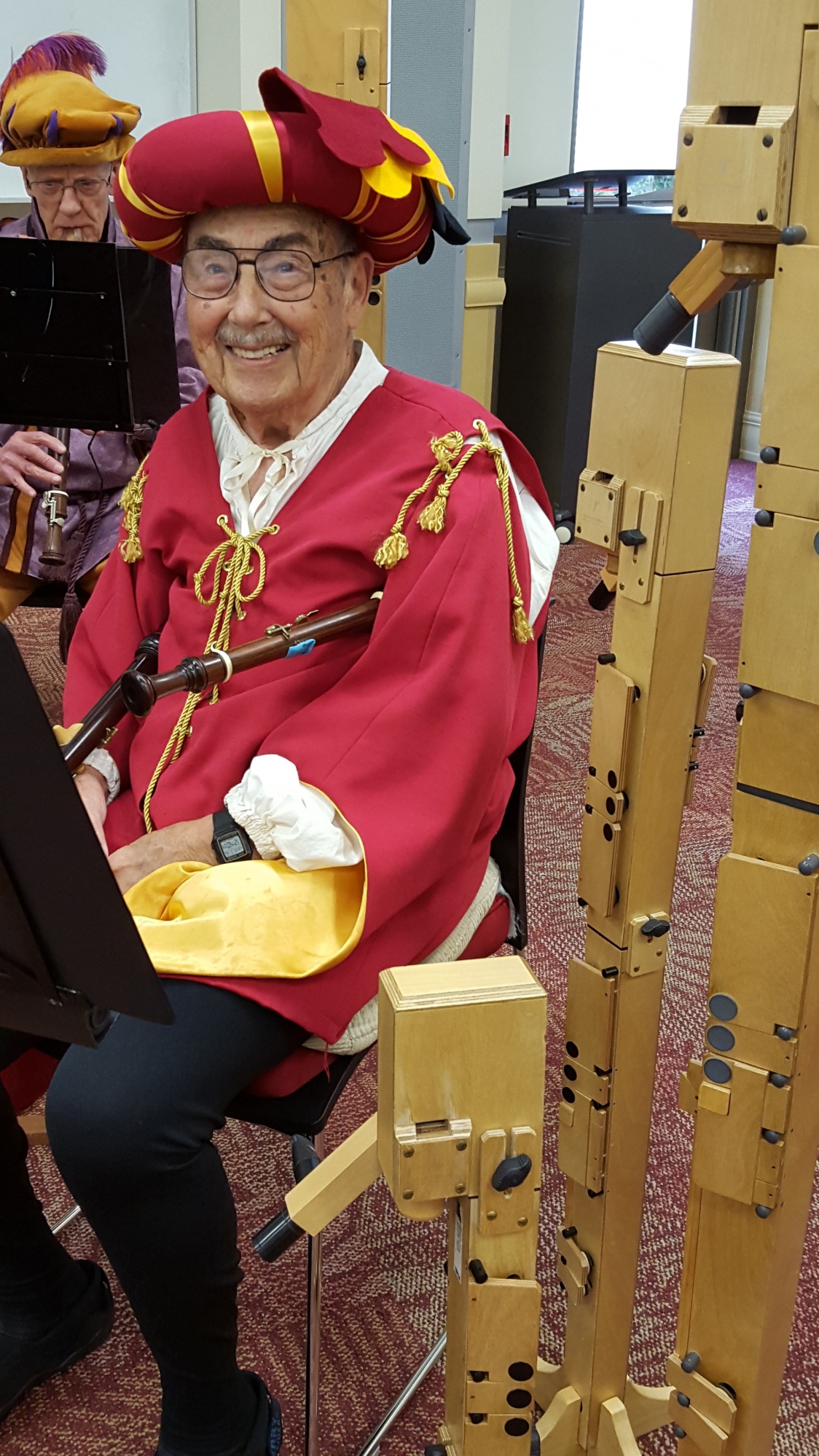 I was recovering from a rotator cuff injury with my arm immobilized when I saw an ad in the newspaper announcing recorder lessons. I was looking for an activity I could do with my injury. I had been musical all my life, playing the guitar and banjo, although I had never learned to read music. I called the number in the ad and was told that even with my injured arm, I could learn to play the alto. I took some lessons and that was the beginning of my recorder playing. I now play contra bass through soprano and love playing Renaissance music in groups.
–Dan Muss, Deep Creek, MD 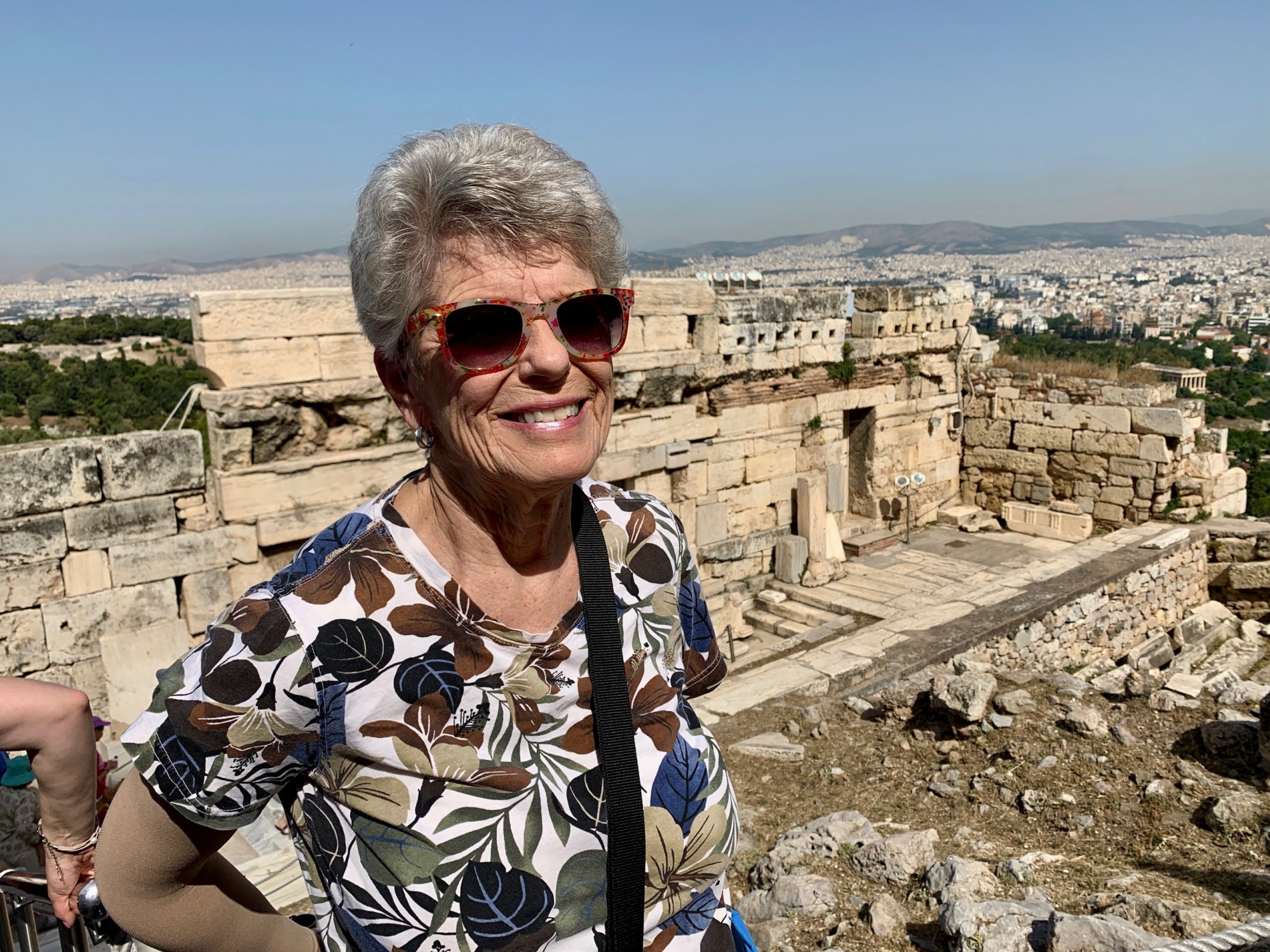 It wasn't until I was about to retire that I decided I wanted to take up an instrument again. While visiting my mother in a nursing home in Florida, we attended a recorder concert. I thought to myself, "Now that looks like fun and besides the instrument is very portable. Maybe I'll look into it." Back home a friend offered to give me lessons in exchange for the "privilege" of learning to teach recorder. I took from her for about a year and a half and just loved the process of learning something new. She kept hounding me to join a group, but I kept stalling until finally, in the summer, I found a workshop in the DC area. It was billed as "Learning to play by Ear." Although I was definitely low man on the totem pole, I managed to spend most of that week singing intervals and rhythms and returned to Charleston ready to fully engage.
–Anne Nietert, Greenville, SC 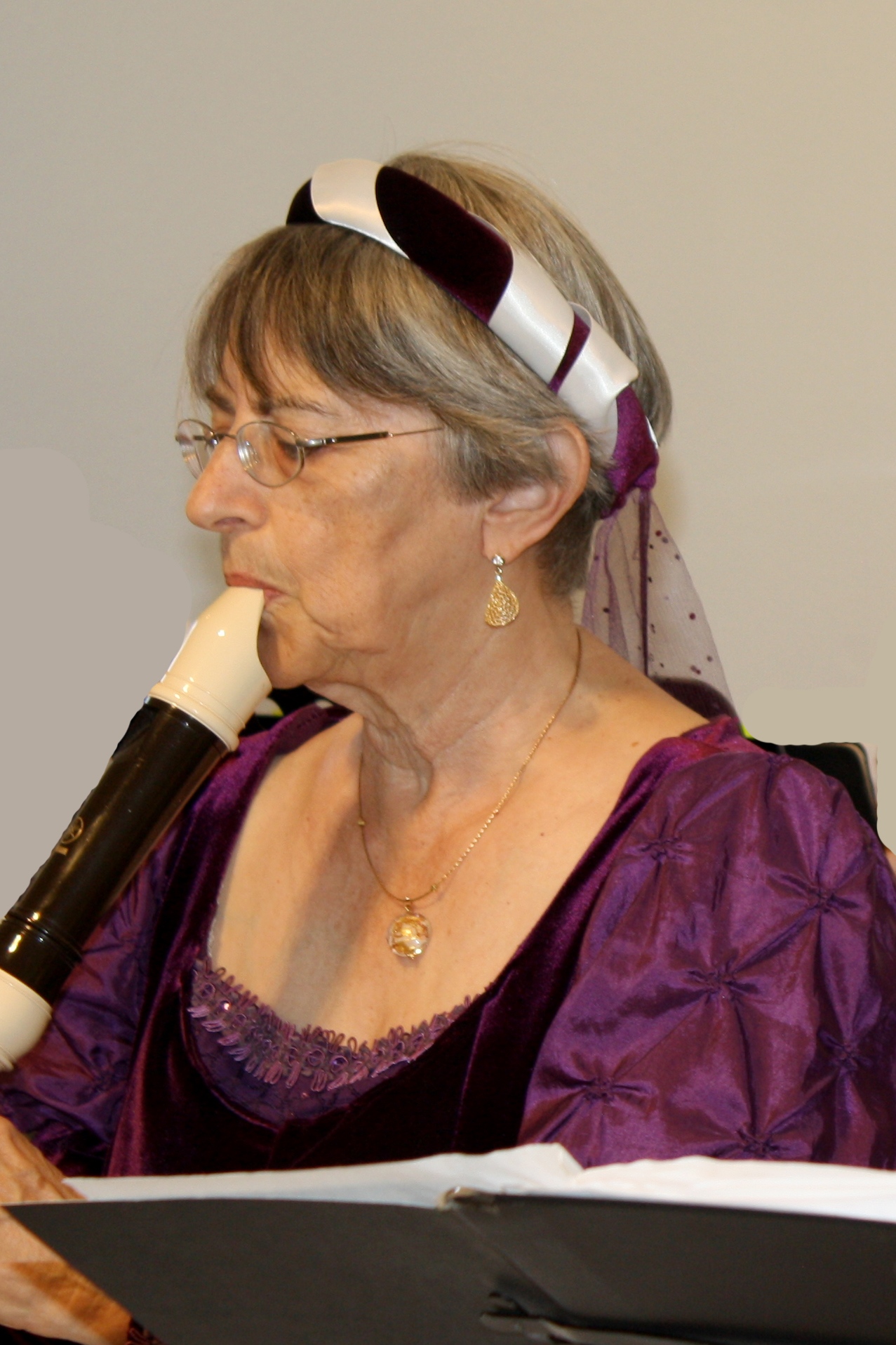 I had just moved to upstate New York in my 20s and received a flyer in a "newcomer's packet" in the mail one day. I had played the flute in high school and was not yet working in NY when I joined my Air Force husband in Rome, NY. I called the number and was fixed up with a tenor and I bought a Pearwood alto for $50. I played in a trio, performing at community events until we left NY. Thirty or forty years flew by with no recorder action. When I retired, I took up the recorder again and enjoy playing now in several performing groups.
–Carol Mishler, Sarasota, FL 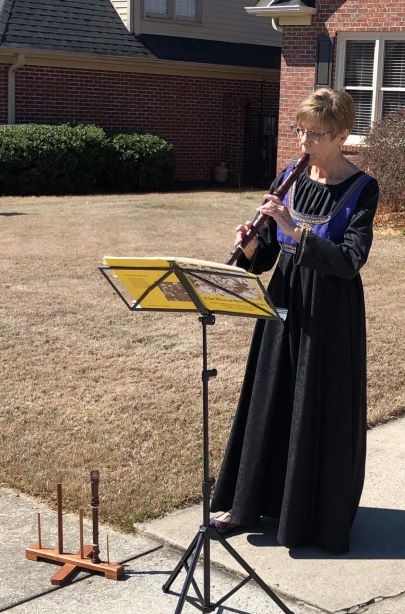 My story started in 1969 when I moved to Auburn, AL. As the wife of a new university professor, I was invited to an event to meet other wives and learn about activities available. Since I had played flute for many years, I was immediately drawn to the recorder table. M’Lee Hardie was the sweet woman at the helm of five active groups that met once a week. After moving from Auburn in 1989, I played with groups in Raleigh, NC and now in Greenville, SC. “Jasmin Recorder Consort” enjoyed playing many years at Madrigal Banquets sponsored by a local church. After retirement my husband and I enrolled in classes for seniors at Furman University where I taught “Recorder for Rookies” in 2008/2009. That evolved into our “OLLI Consort”—meeting weekly, enjoying our time together and occasionally performing.
–Sharon Howell, Greenville, SC 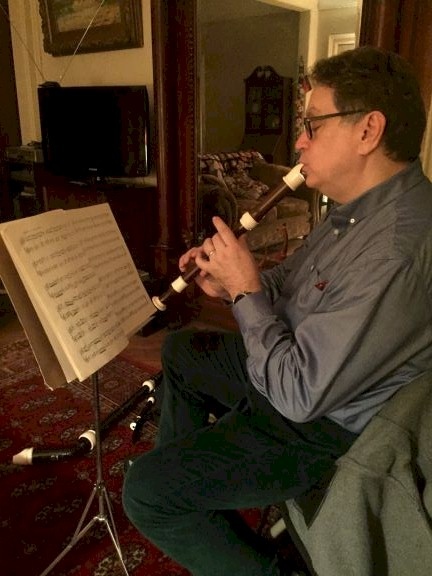 I played soprano, alto and tenor recorders at the beginner level in high school, often playing with my mother and cousins. Fast forward thirty years. I wanted to add more music to my life after a long time out and began looking for a recorder teacher.  I went to the ARS website and looked at the recorder teachers listed. One name stood out as being familiar to me. She had the same name as a recorder player on a record album of my mother's from the late 1950's - Martha Bixler.  I gave Martha a call and we began lessons. She introduced me to the bass recorder via Mrs Gillivray's wonderful book and opened up the world of early music to me by encouraging me to go to Pinewoods.  Her gentle encouragement has kept me playing for over a decade.
–Ben Frisch, New York, NY 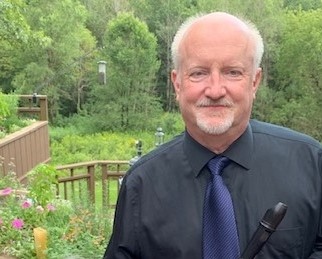 I grew up playing the trumpet and seriously considered a trumpet performance major in college before opting for chemistry instead.  I did not play through college and had to sell my trumpet for food in grad school.  Around the age of 30, I realized that I missed playing music.  I remembered playing a bass recorder with my dad at a recorder group during middle school and thought I would explore it.  I bought some beater recorders at a pawn shop, found the local recorder society, wound up as president after a couple of years, and met Clea Galhano, who had just moved to town.  I started taking lessons from her and got hooked. Over the years, I have started and played with several groups and received great enjoyment from them.  I especially enjoy playing with harpsichord/piano and cello.  Now, 30 years later I still enjoy playing, but am also enjoying arranging and composing for various instruments (including the recorder).
–Brad Wright, Woodbury, MN 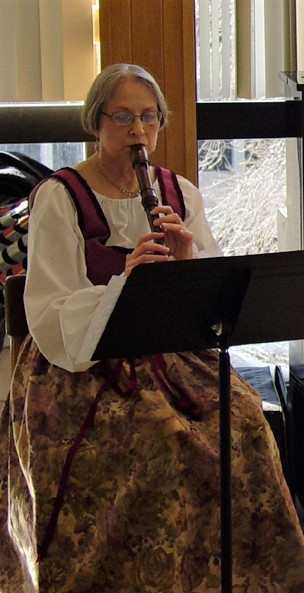 One day at work I was leading a workshop on finding your core purpose in life. The exercise was to write down everything you wanted to do whether it was feasible or not. The first thing I wrote down was travel and the second was play music in a group again. It made me realize I needed more than just listening to music. I got home from work that day and went directly to the community education booklet from our school district. One of the classes was learn to play the recorder. My son’s alto was in the piano bench. That was in 1990 when I was 48. Since then, I’ve played professionally with three different groups. Served two terms as president of the Twin Cities Recorder Guild. Retired now as my back won’t take standing up for long any more. Have lots of people who love to come to my house and just play anything and everything. I need playing music in my life.
–Barbara Aslakson, St. Louis Park, MN 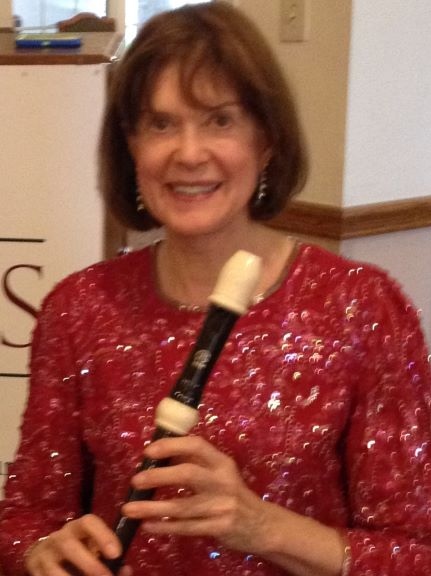 I was in Munich in the 1960s, planning to meet my husband there in a week. It was November and cold and rainy. I felt I was coming down with the flu.
What to do in my dismal hotel room while I nursed myself back to health? I had seen a music store close to the hotel. I went out and bought a soprano and a book and taught myself the basics during my week of feeling miserable. I gave up the recorder for many years filled with grad school, kids and work. In 2003, in my 60s, I heard a trio--a violin, a cello and a recorder--
playing at a local gallery in Tucson. I felt a stab of ...pain? ...desire?  Again, I went out and bought a recorder-- and have been playing ever since.
–Betsy Dane, Gettysburg, PA

My romance with the recorder began in high school on viewing a photo in the Edward Steichen curated collection, The Family of Man, of a young woman, sitting alone on some levee, playing a recorder. I acquired my first recorder in 1980, and in 1985 found my first opportunity to play with an informal group. It was after I retired that I found a teacher, and began to study in earnest; and like Pablo Casals, I play and practice because I think I'm getting better. I love the instrument for being so diverse, and yet relatively simple, and find great joy in playing.
–Vickie Starbuck, Columbus, OH 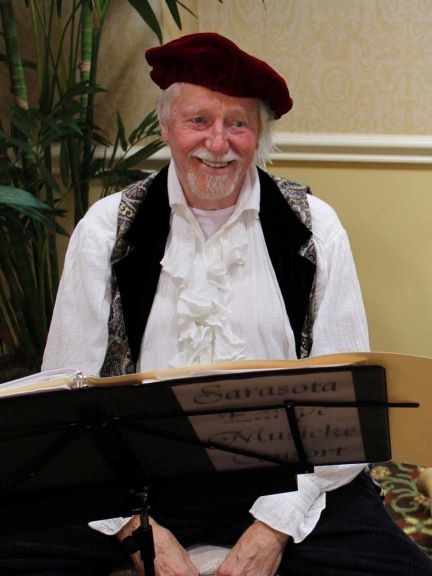 I played trumpet in high school, but when I got an apartment, I discovered that thin walls just don't work as a practice space.  About that same time, a friend at work invited me over to his house to play recorders.  I had heard of them, but never played one and was pleasantly surprised at how easy they were to pick up and play, and then, later, how challenging they were to play well.  That was 54 years ago, and that tension between easy to get into and challenging to play well has kept me engaged ever since.
–David Goings, Ann Arbor, MI 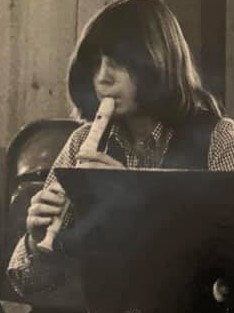 Played flute from 4th grade, that year I went to Williamsburg and heard a recorder. Loved it and asked for one, played all my flute music on the recorder and voila, I found a whole new world in early music! Lived in Boston so I found a teacher that challenged me. Have played in consorts and ensembles ever since... that’s over 50 years and still practicing! Photo is my first collaboration in 1972.
–Nancy Brian, Broken Arrow, OK